The European Union grew out of a desire for peace in a war-torn and divided continent. Five years after World War II ended, France and Germany came up with a plan to ensure their two countries would never go to war against each other again. The result was a deal signed by six nations to pool their coal and steel resources in 1950.

Seven years later a treaty signed in Rome created the European Economic Community (EEC) – the foundations of today’s European Union. The UK was one of three new members to join in the first wave of expansion in 1973. Today the EU has 28 member states with a total population of more than 500 million.

Which countries belong to the EU? 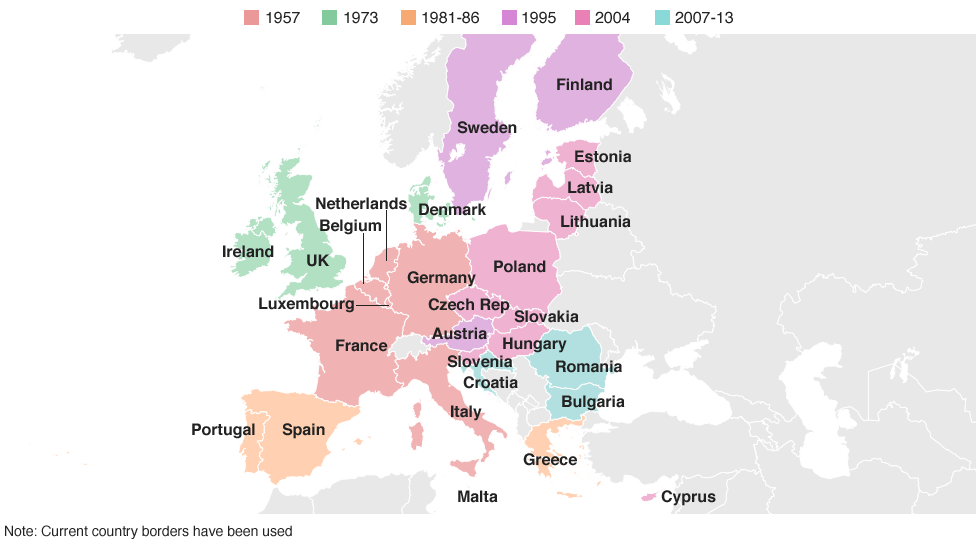 The EU has grown steadily from its six founding members to 28 countries. Belgium, France, Germany, Italy, Luxembourg and the Netherlands signed up to the EEC, or Common Market in 1957. Britain, Ireland and Denmark joined in the first wave of expansion in 1973, followed by Greece in 1981 and Portugal and Spain five years later. Eastern Germany joined after unification and Austria, Finland and Sweden became part of the EU in 1995. The biggest enlargement came in 2004 when 10 new member countries joined. Romania and Bulgaria joined in 2007 and Croatia was latest to sign up in 2013.